Camogie Féile 2022 - A Festival in Westmanstown 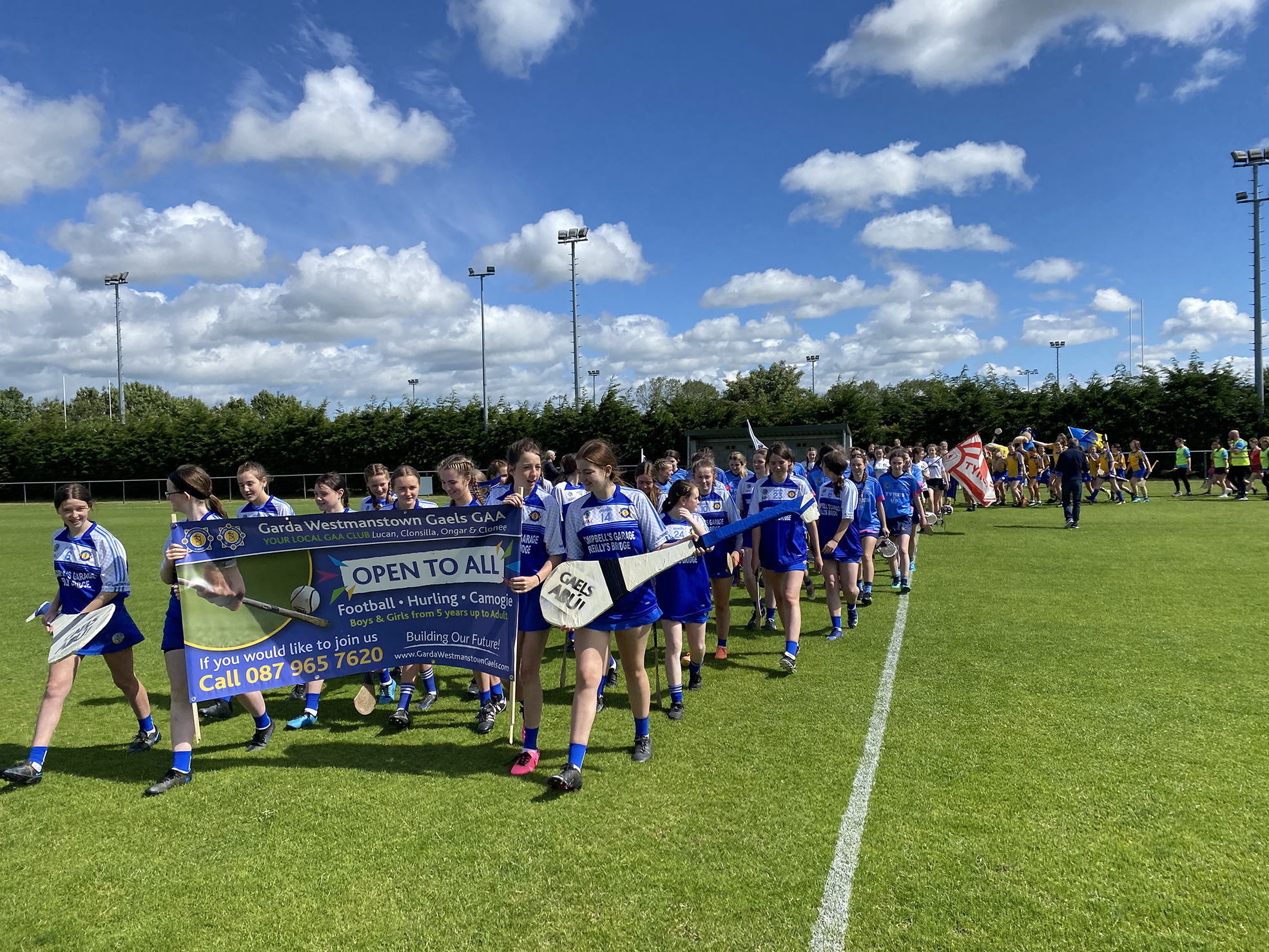 Published: about 2 months ago

On Saturday 25th June, the John West National Camogie Féile was held in Jerome Twomey Park. Teams from Tyrone, Mayo, Meath, Cavan, Wicklow, Roscommon, Donegal and Dublin came together to compete and to celebrate the wonderful game of camogie.

After three rounds of four games the highest scoring four teams would get to compete in two finals for the Cup and for the Shield.

But long before any games got underway there was some trojan work done by our facilities team and the small army of helpers to make our grounds as good as they have ever looked. Weather apps have never been checked as much and whatever prayers were said on the night before Féile, Mother Nature must have been listening, we were treated to blue skies and sunshine for a lot of the day with one five minute downpour over the entire event.

At 11am the parade got under way with all teams present being cheered and applauded around the pitch in a half-lap of honour to the sound of 'Let's Get Down To Business'. With smiles a-plenty and lots of laughter, it was clear that this was going to be a wonderful experience for all in attendance.

The parade was followed by Amhrán na bhFiann and then a minutes silence was observed in memory of Co. Tyrone hurler, Damien Casey. A very touching moment that reminded us of the importance of events like Féile to help make cherishable moments in the lives of these young players. 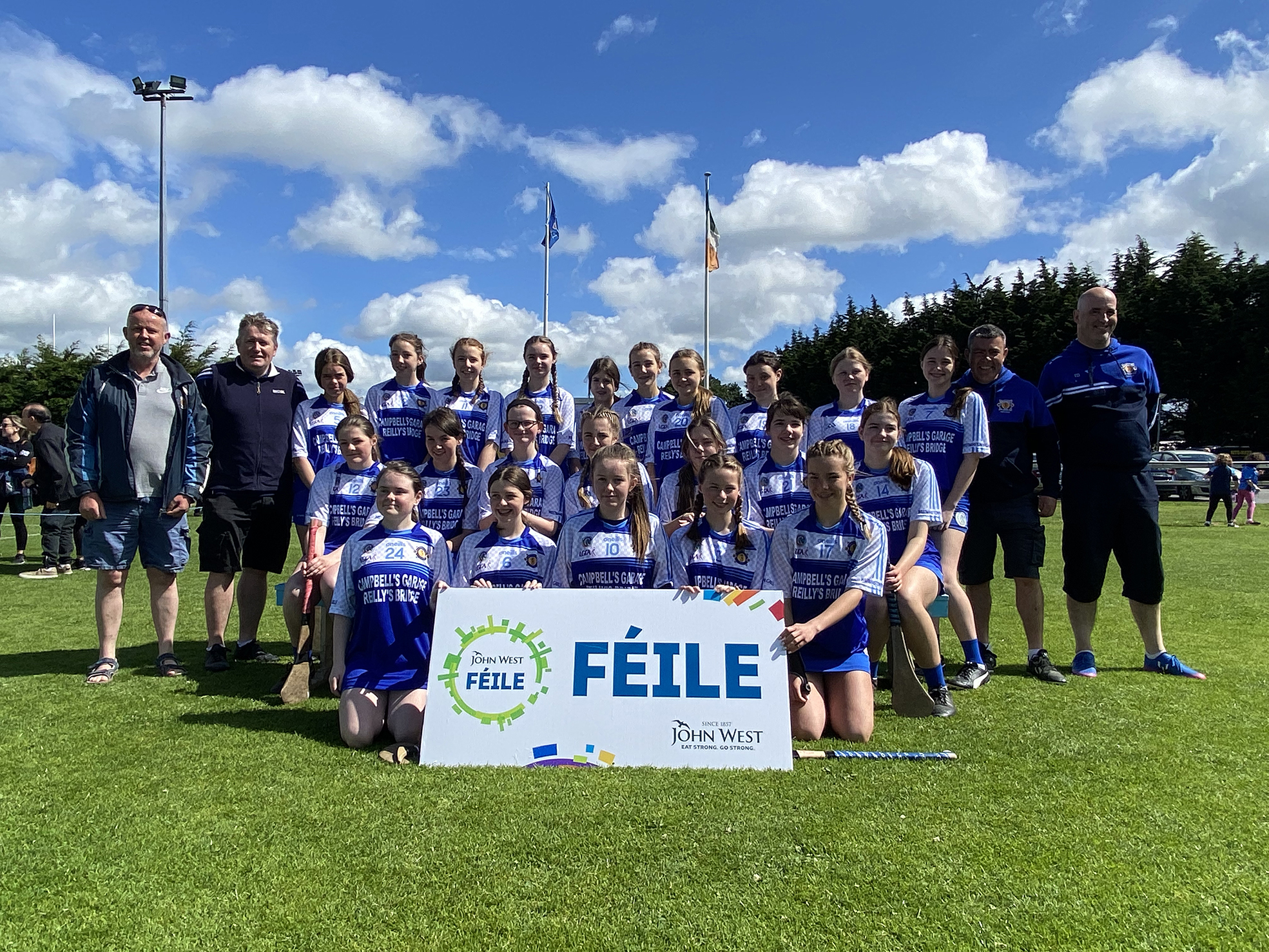 With Round 1 out of the way, there was plenty of sideline chat about next games, upcoming opponents, stand out performances and whether sandwiches tasted better cut into squares or triangles - the important stuff.

There was no let up in the tempo with Round 2 getting underway ten minutes later. It was Omagh v Bailieboro on Pitch 1 and Westport v Annacurra on Pitch 2. Results at full time: Omagh 2-6 Bailieboro 0-0 / Westport 4-2 Annacurra 2-2 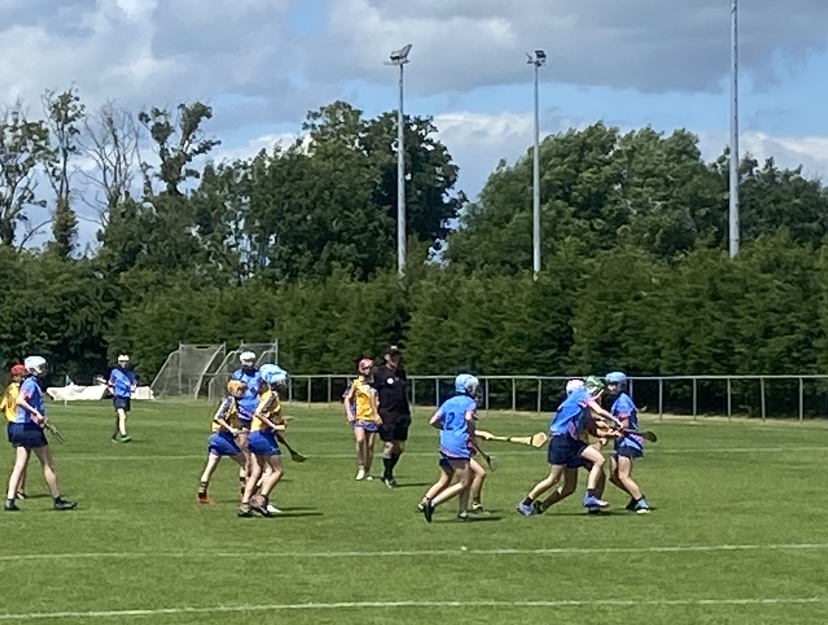 At 1pm it was time for the Gaels again, they were to face a very strong Dominics side on Pitch 2 while over on Pitch 1 it was Beart v Clann Na nGael. Both games were full of skill and athleticism with none of the teams giving their opposition an inch. Full time results: Beart 1-3 Clann Na nGael 3-3 / Dominics 2-3 Westmanstown 2-1

The games were 12 mins each half with a 2 mins half time break. With the adrenaline rush of the first 2 games wearing off, looking at the scoreboard there was 3 teams starting to break away from the bunch: Westport and Annacurra in Group 1 and Naomh Dominics in Group 2, but if anyone thought it was going to be plain sailing into the finals, like any Féile, there were a few upsets still to come.

With Alan Lynch doing a superb job shepherding the timetable, Round 3 fired ahead on time. It was the turn of Omagh St. Enda's to face Westport on Pitch 1 and over on Pitch 2 we had Annacurra v Bailieboro. Results at full time Omagh 0-1 Westport 1-5 / Bailieboro 0-0 Annacurra 5-8

The final 2 games to close out Round 3 were Beart v Westmanstown on Pitch 1 and Dominics v Clann Na Gael on Pitch 2. The 3rd game of camogie in two and half hours, it was astounding to see the level of determination and also courage on both pitches. Playing camogie like young warrior women, one and all. Full time results: Beart 2-0 Westmanstown 2-3 / Dominics 3-5 Clann Na nGael 0-2

We had a small interval after the group stages to double check scores, and write up the fixtures for the Semi-Finals. Omagh St. Enda's had asked for a few minutes so they could present the host club with a framed presentation to mark the occasion. It was very graciously received on behalf of the club by U15G's coach, David Solan. 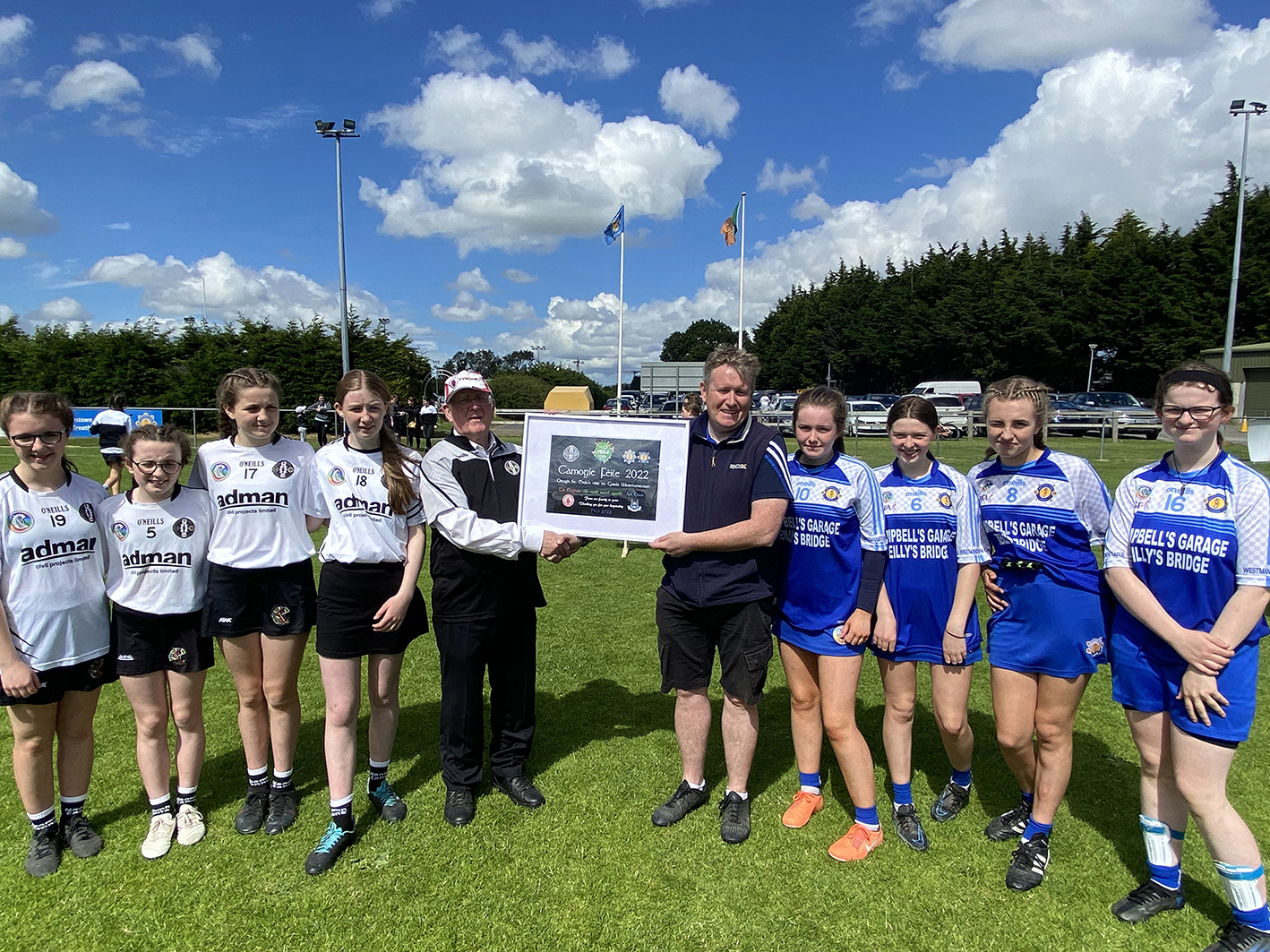 The Semi Final Fixtures were to be played as follows: Omagh v Beart / Bailieboro v Clann Na nGael in Semi Finals 1 and 2. Westmanstown v Westport / Dominics v Annacurra in Semi Finals 3 and 4. These games were some of the closest scorelines of the day. There would be extra throat lozenges needed for the mentors on the sidelines as they had almost shouted themselves hoarse. The passions ran high and the encouragement from the sidelines had reached fever-pitch. Full time scores (and for a place in the Shield and Cup finals were): Omagh 1-2 Beart 0-2 - Omagh were going through to a place in the Shield final. Bailieboro 0-0 Clann Na nGael 4-0 - Clan Na nGael to face Omagh for the Shield.

As soon as Omagh v Beart was over it was Go-Time for Dominics v Annacurra and Westport v Westmanstown, these games would decide who would play in the finals for the Cup. Full time results: Dominics 1-3 Annacurra 0-5 / Westport 2-4 Westmanstown 1-3. The stage was set for a Roscommon v Mayo final.

A special mention to our fantastic Féile 2022 team - although the scoreline didn't favour our girls in the semi finals, this team have done a great service to our club. Because of their hard work and brilliant performance on a very wet weekend back in May, winning their Division 4 Féile in Trinity Sports Grounds, they have given the whole club the sort of exposure we could only wish for. You are the finest ambassadors for the Blue and White and we are all very proud to have you as part of our club. We can't wait to see what lies ahead.

The Shield final took place on Pitch 1 and the Cup final on Pitch 2. Omagh St Enda's were a team that appeared to grow stronger after each game and brought the challenge to Clan Na nGael. The consistent skills - quick striking, finding the space and splitting the opposition's defence made it difficult for them to be stopped. Full time result Omagh St Enda's 3-3 Clan Na nGael 1-1. 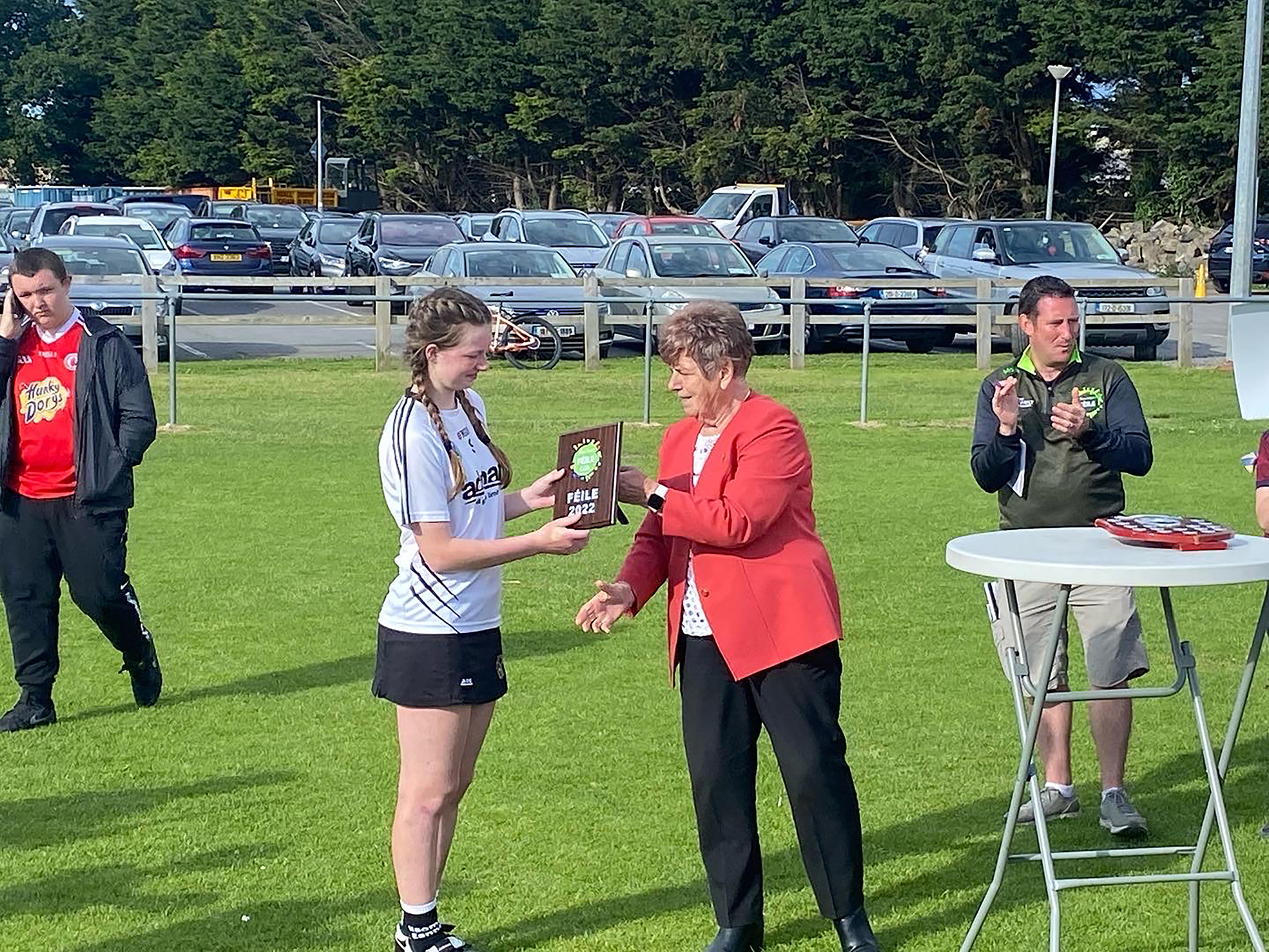 The 'Connacht' Cup Final could have been dubbed 'The Battle of the Saints' (Naomh Dominics and Naomh Padraig), not just because of the names of these clubs but by the exemplary performances from both these teams throughout the day, both on and off the pitch. Neither team lost any of their games but in the end only one could be crowned Camogie Féile 2022 Cup Winners. It went into the half time break 0-1 Westport to 0-0 Dominics. Neither side was giving anything away. Both played camogie at high speed and could play the ball up the pitch with little or no room to manouvre. The battle wore on in the second half and they were toe to toe but with a goal and a point in the difference the Westport girls emerged victorious at the final whistle. 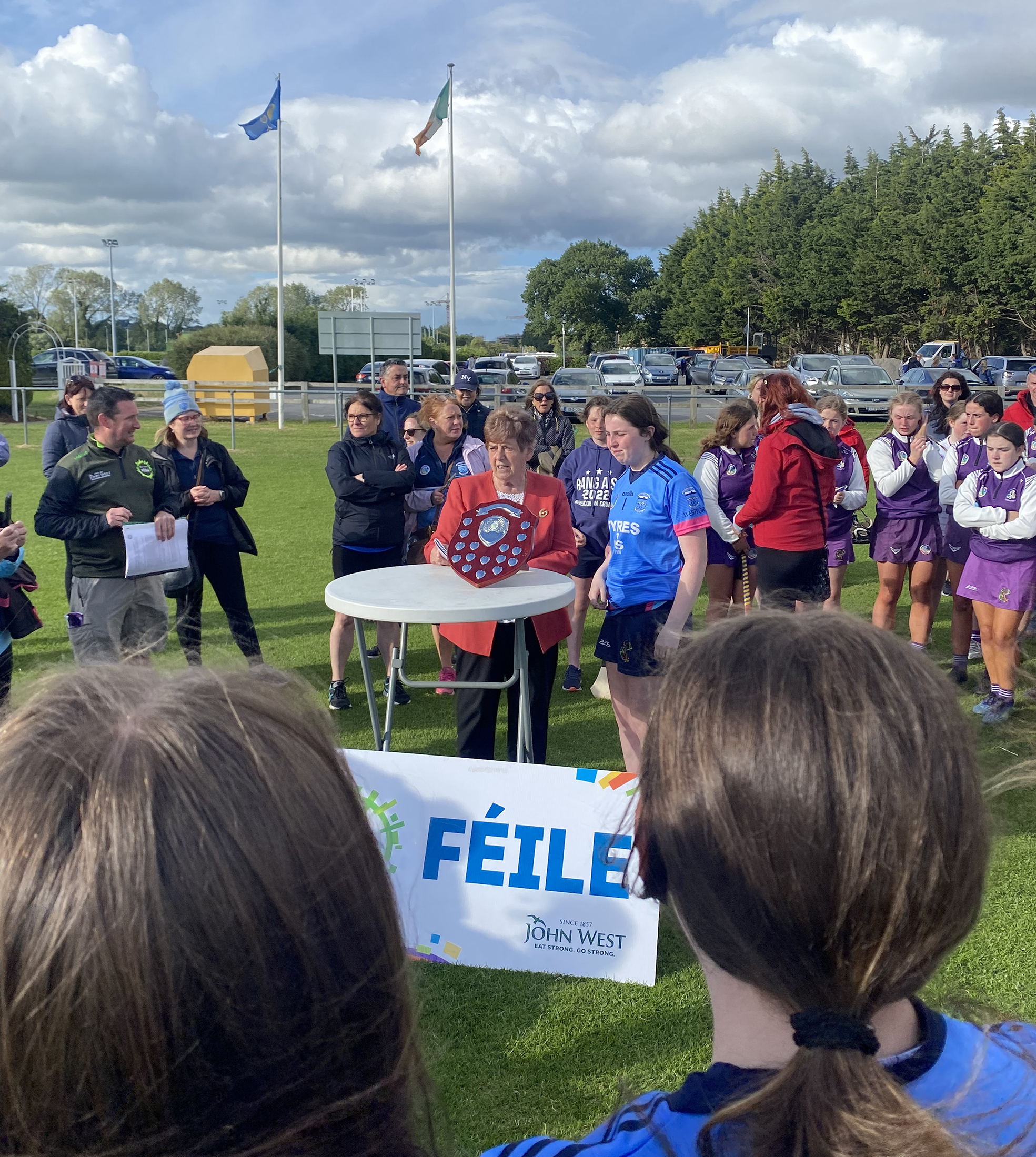 Westport were very worthy winners on the day and finished off their time in Westmanstown with a chorus of The Green And Red Of Mayo. The bonfires were burning when they arrived back to Westport. Congratulations to both Naomh Padraigs, Westport and Omagh St. Enda's, Omagh. Keep up the good work!

And so, the little army of helpers that put it all together, quietly and happily put everything away as dusk settled over Westmanstown. Delighted that our guests enjoyed their day, and definitely a little bit more house-proud.

U14Boys pull off no mean feat in the heat

U14 boys played their final hurling league match before t...