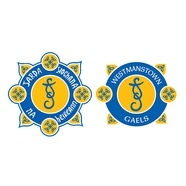 The WMT boys u15 played their Football Feile semi final away to St Brigids today. What a match it turned out to be . WNT were in difficulty from the off from their own kick outs but some fabulous defensive work by all the backs meant that WNT led 0-2 to 0-1 at first water break . Winning kick outs continued to be a problem and st Brigids got a fortunate goal which went through the side netting of the goals . The score at half time was St Brigids 1-6 to WMT 1-3 . WMT earned more possession in third quarter and the forwards were using the ball very cleverly and WMT opened up a 4 point lead a minute before the last water break . St Brigids got a point and then the score that turned the match a free from 25 yards dropped under the crossbar . WMT 3-6 2-9 St Brigids at last water break . The big pitch and the large amount of defending took its toll in last quarter . However it still required a couple of terrific saves from the St Brigids keeper to stop 2 wonderful goal chances for WMT . Final score St Brigids 3-13 WMT 3-6 . This was the boys last competitive match of what has been a tough year with Covid restrictions and injuries to players . The coaches want to thank the whole squad for the tremendous effort put in by the boys this year. WMT Abu .